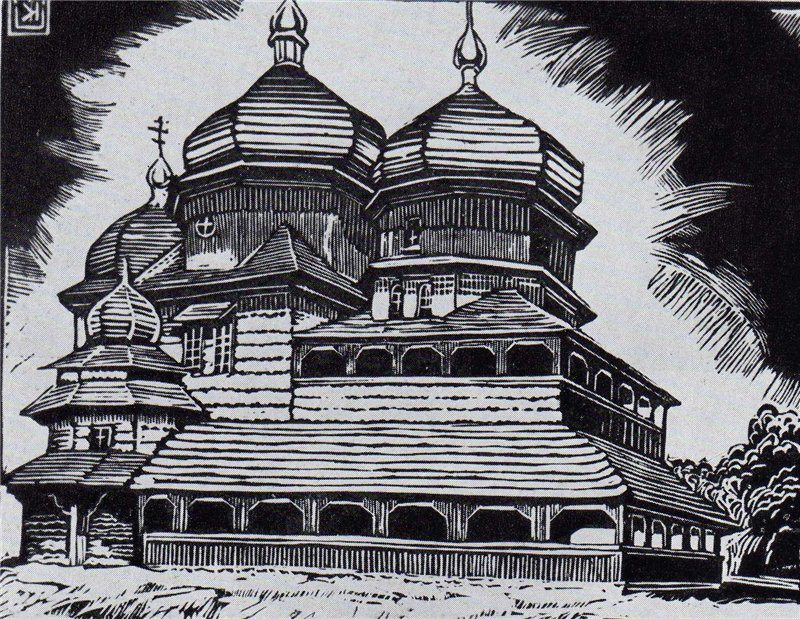 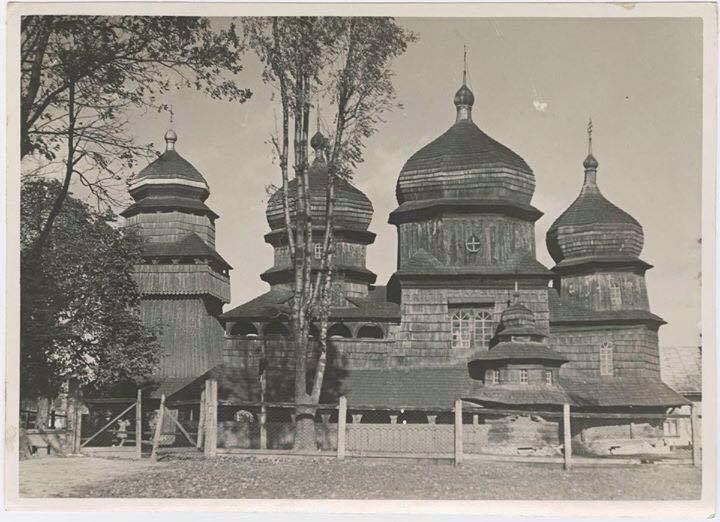 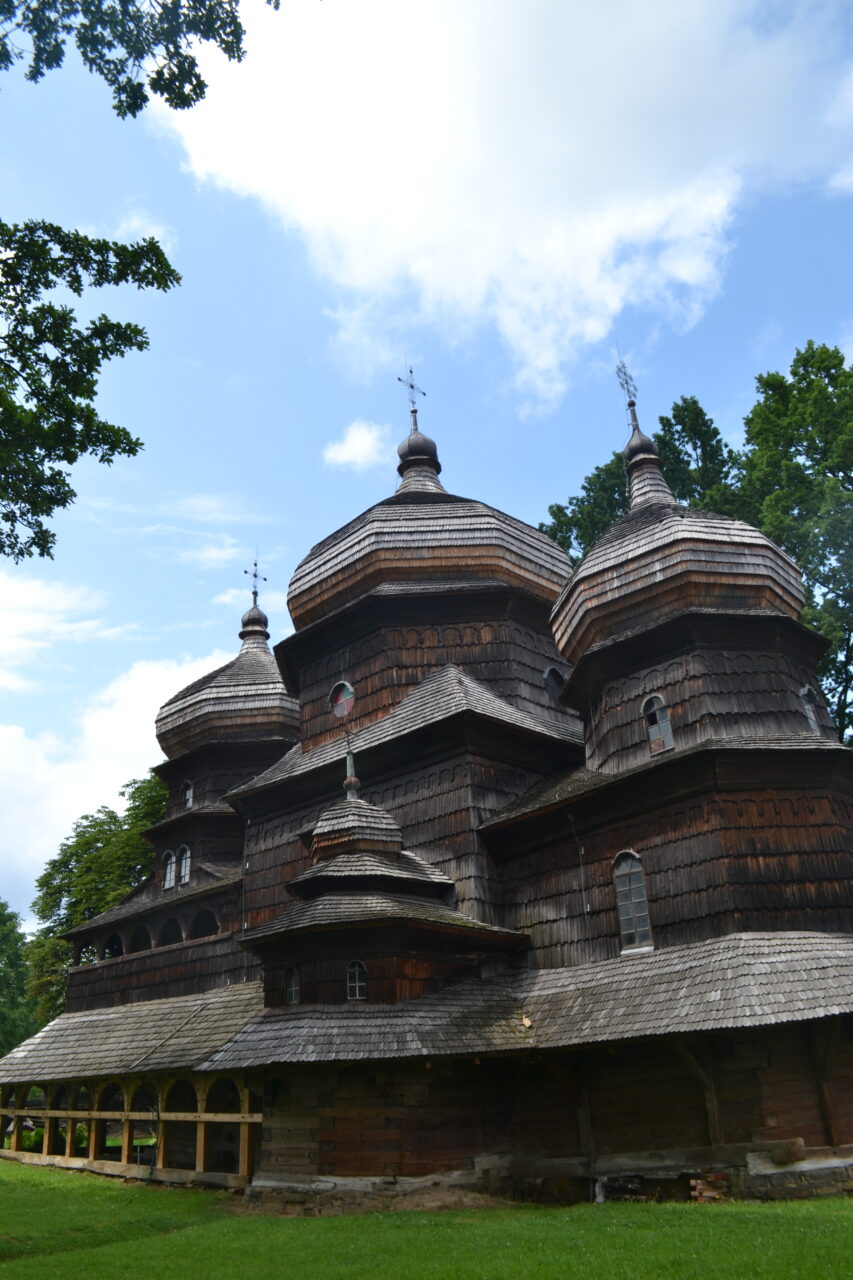 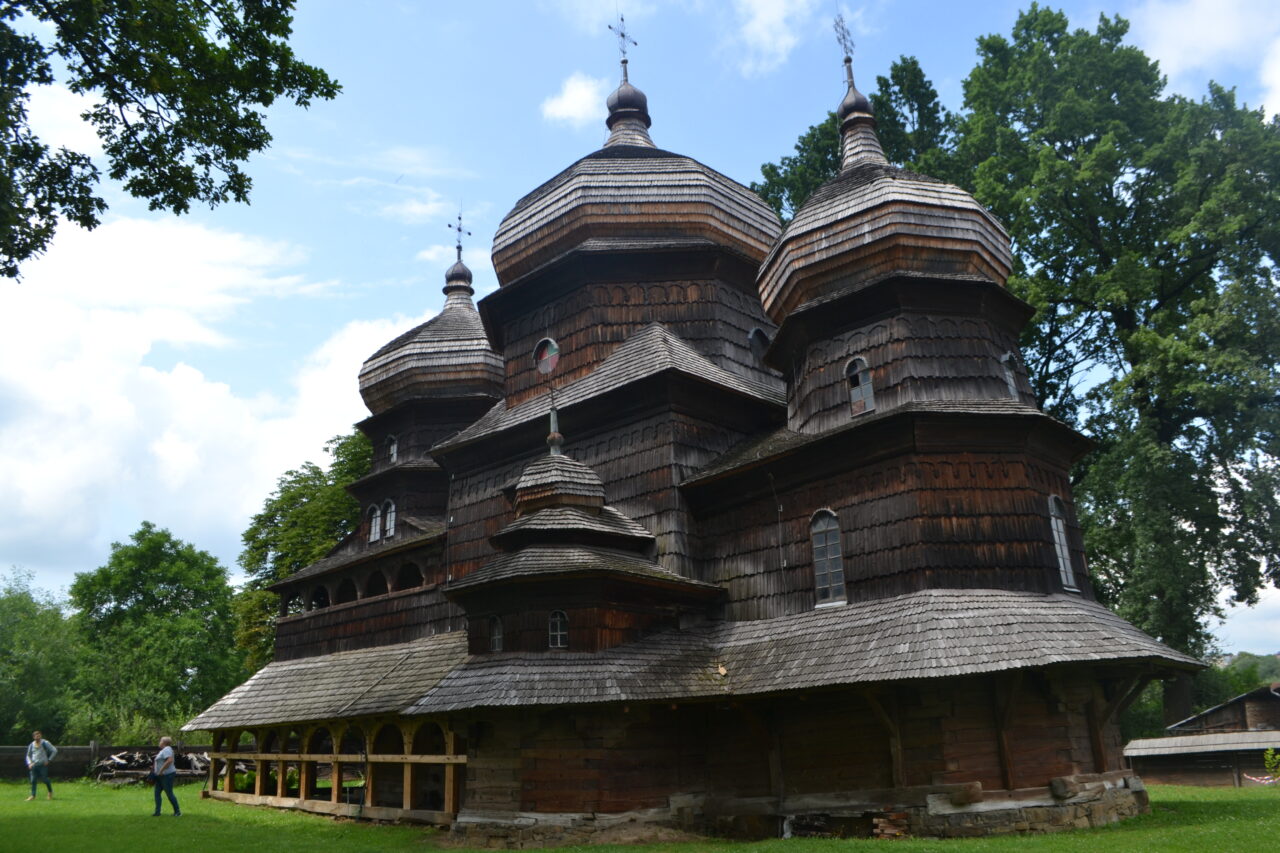 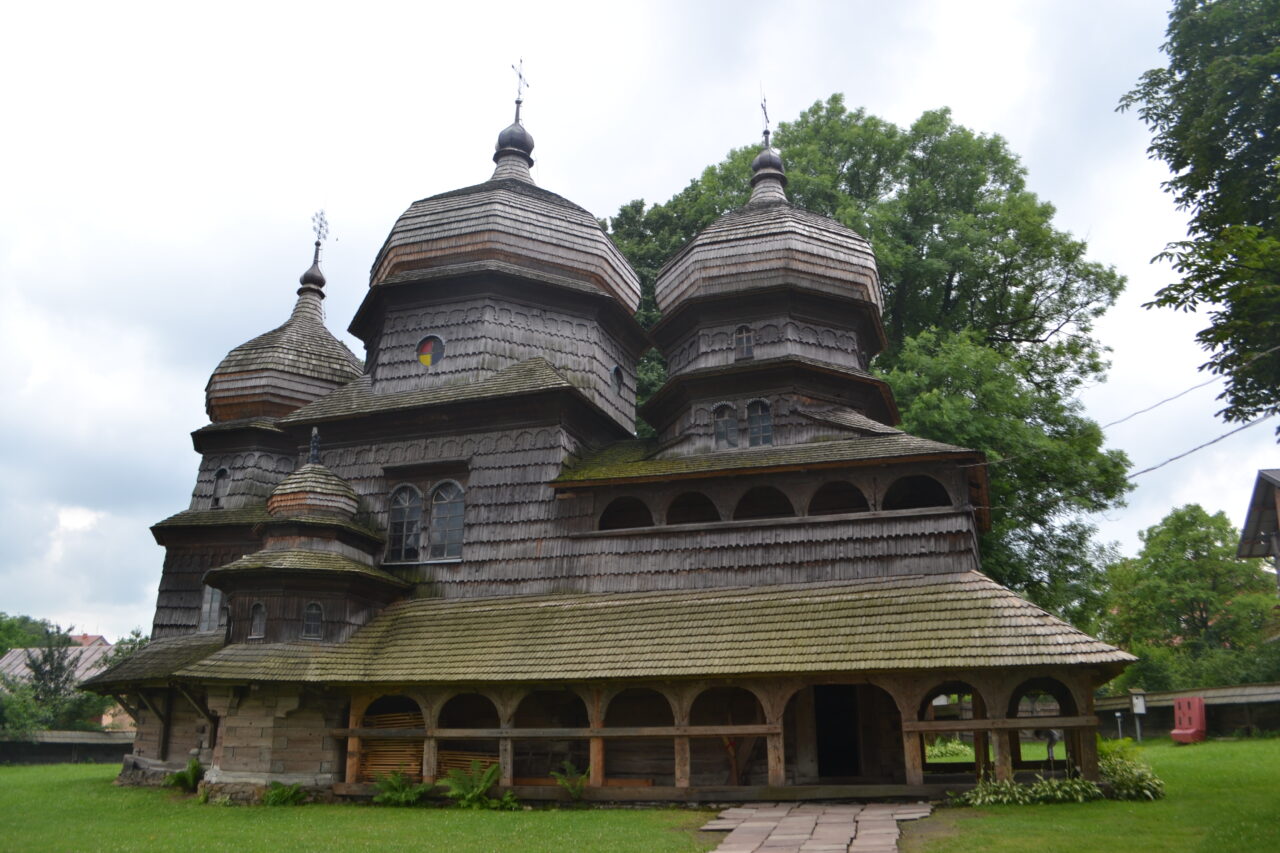 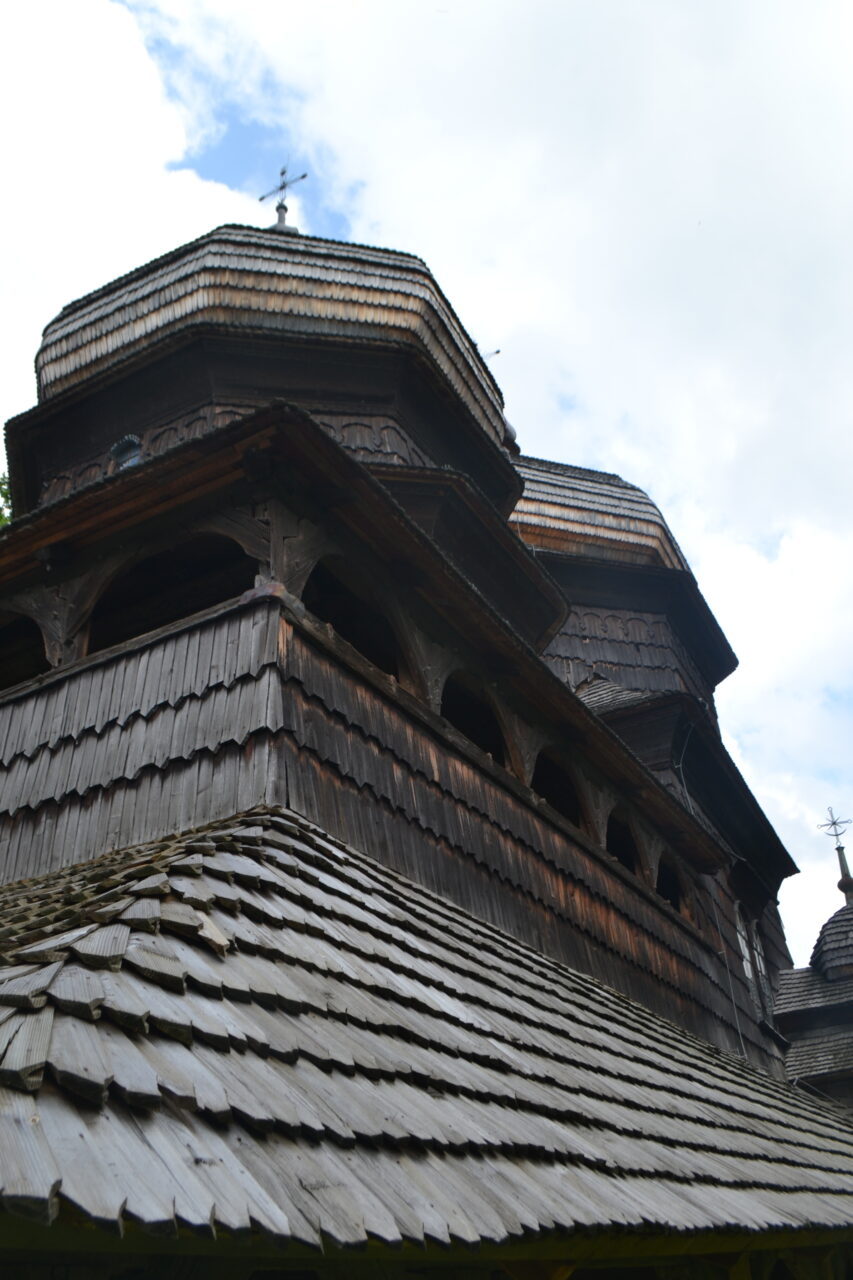 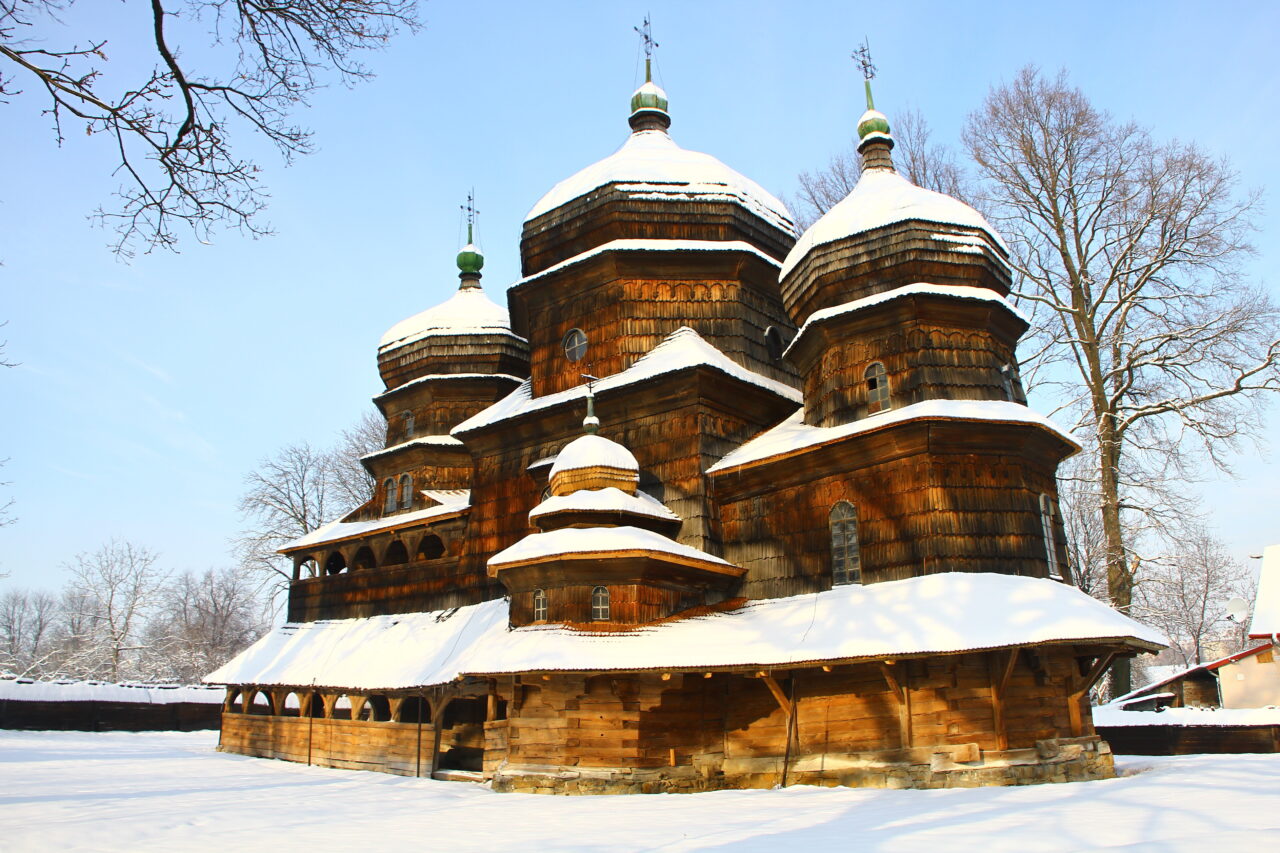 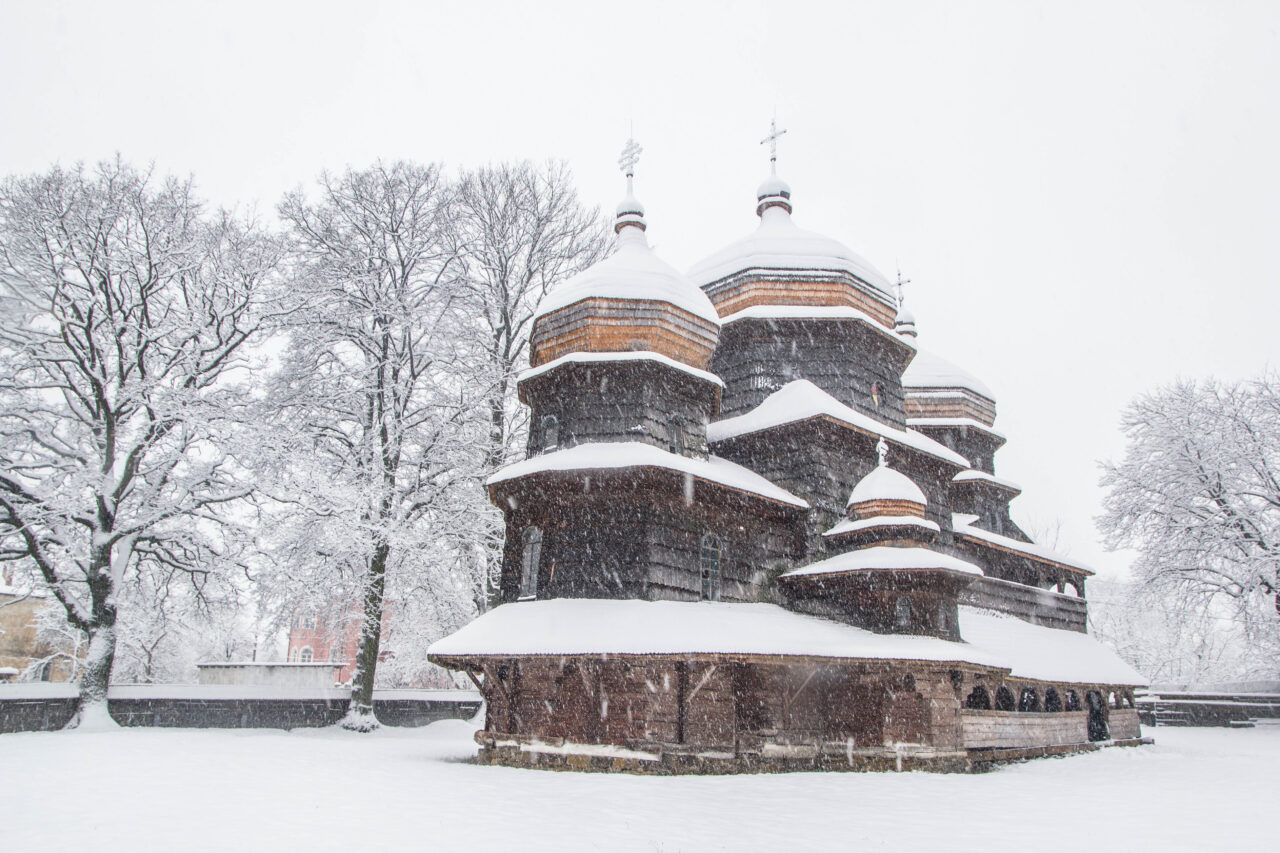 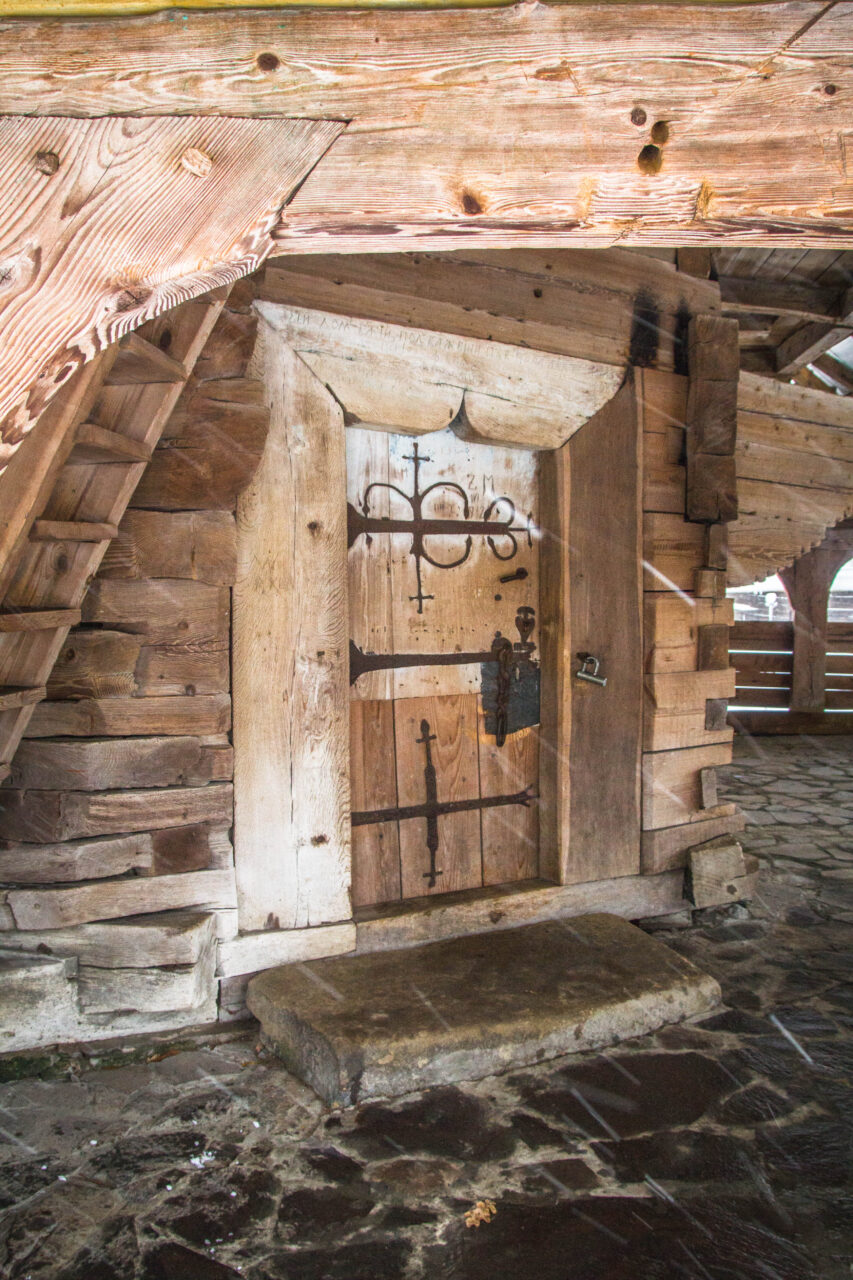 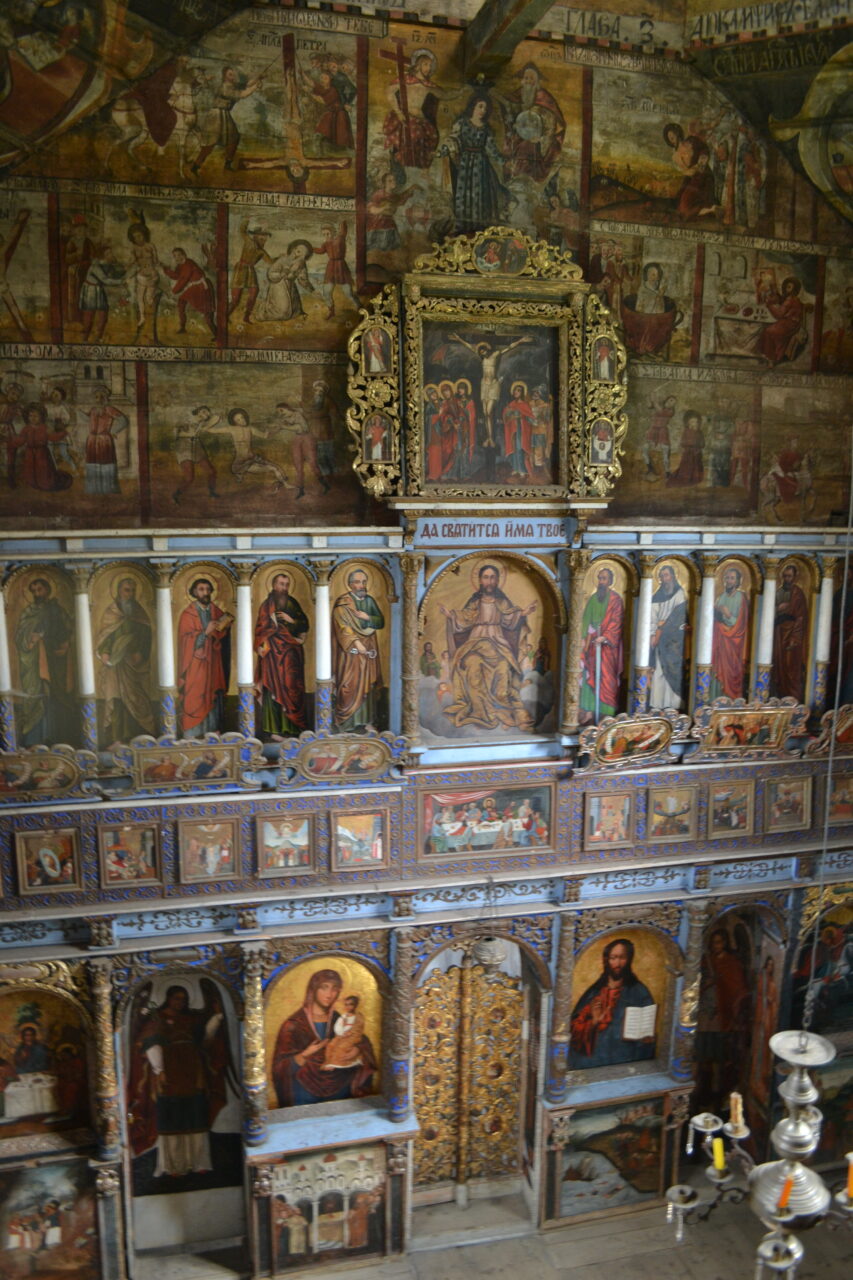 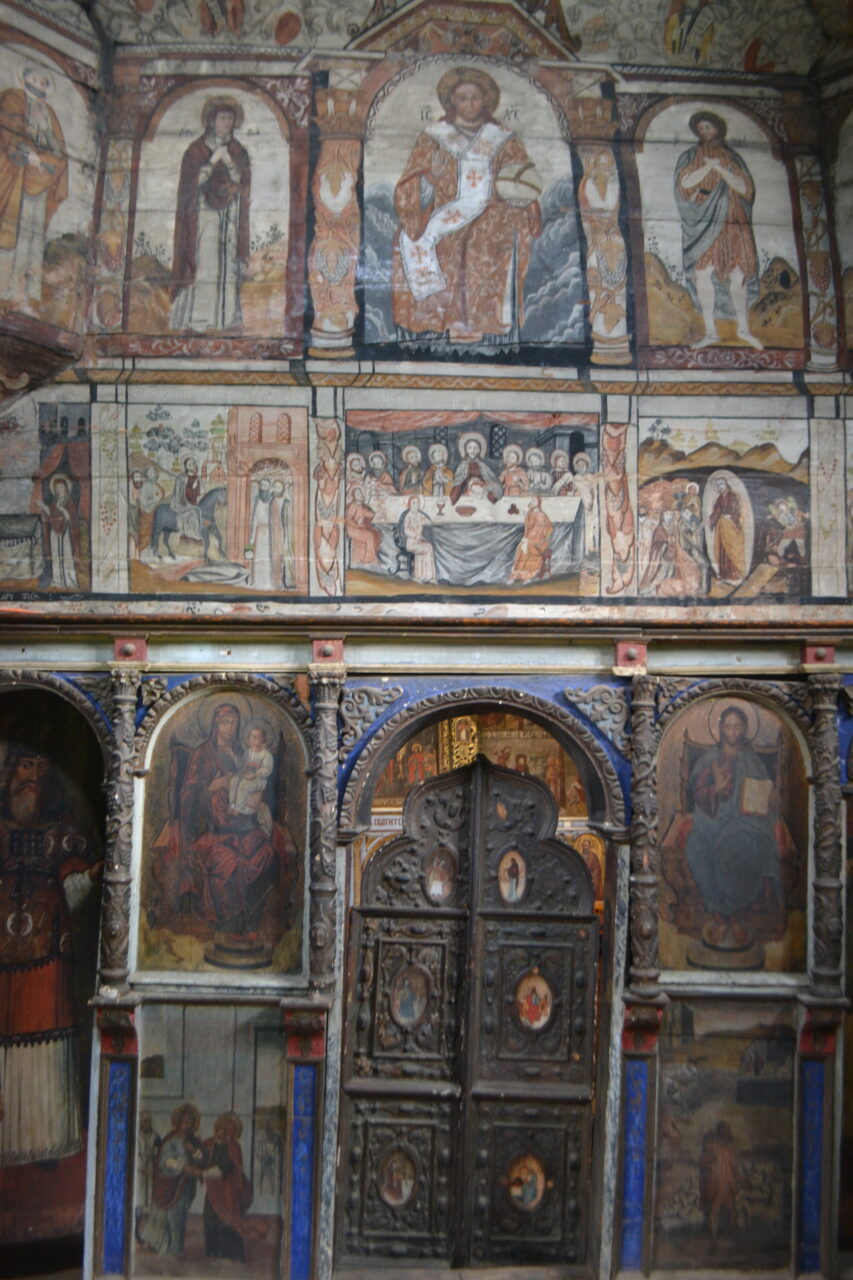 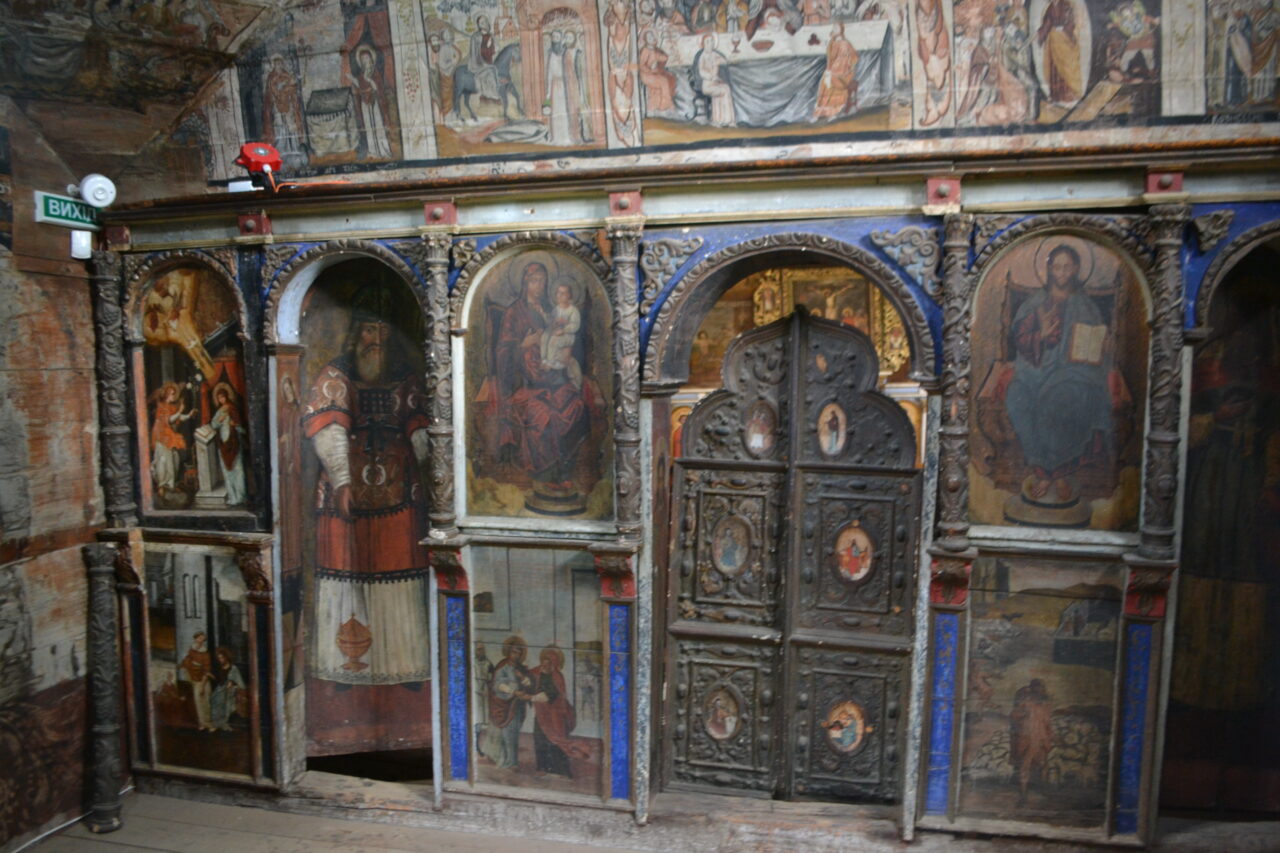 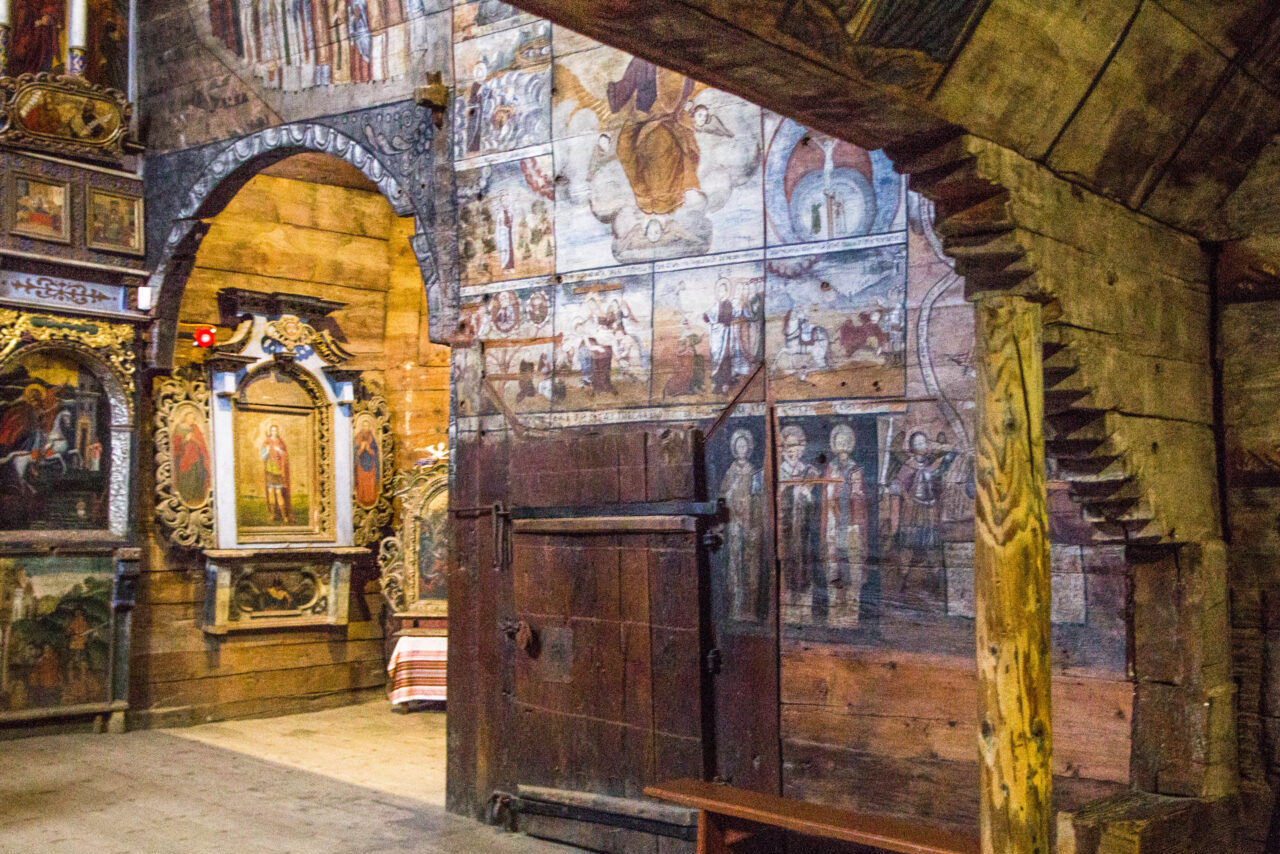 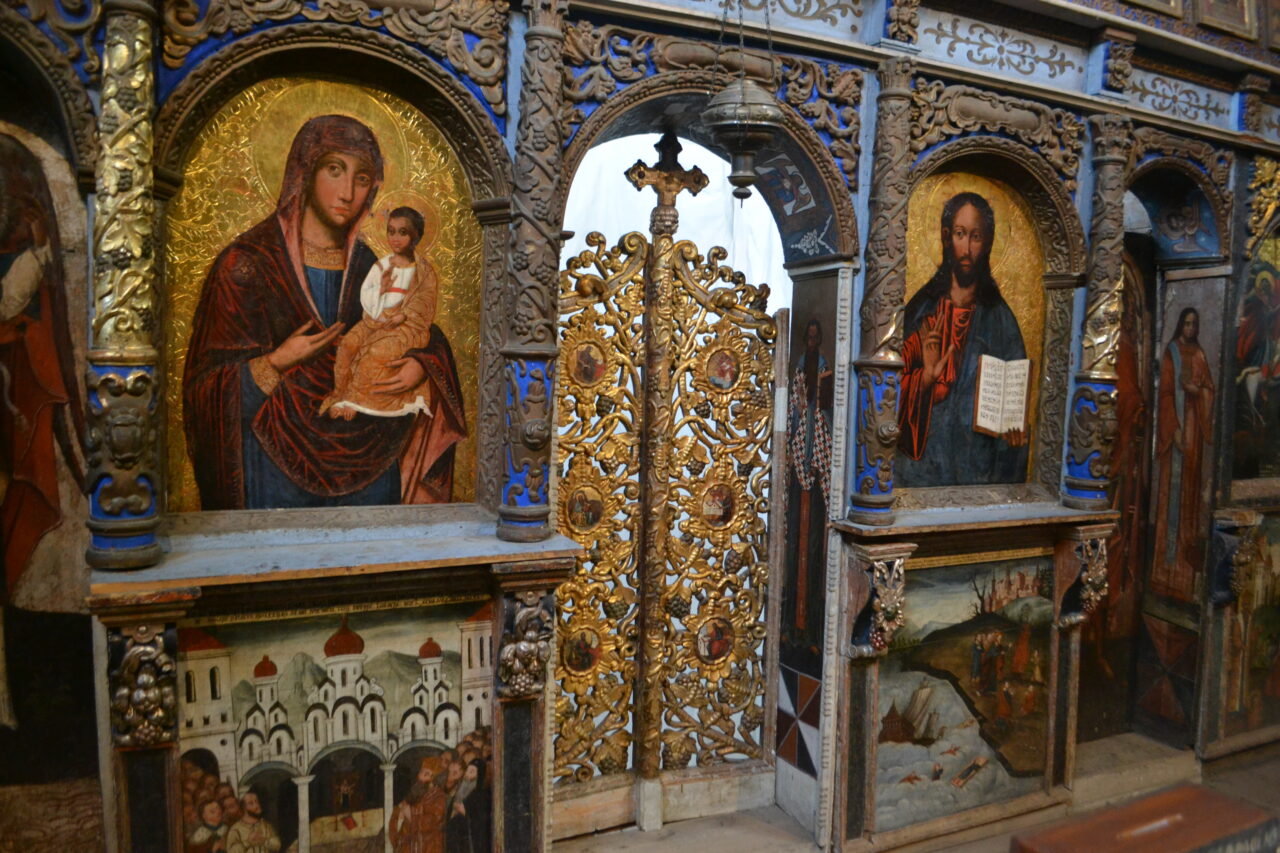 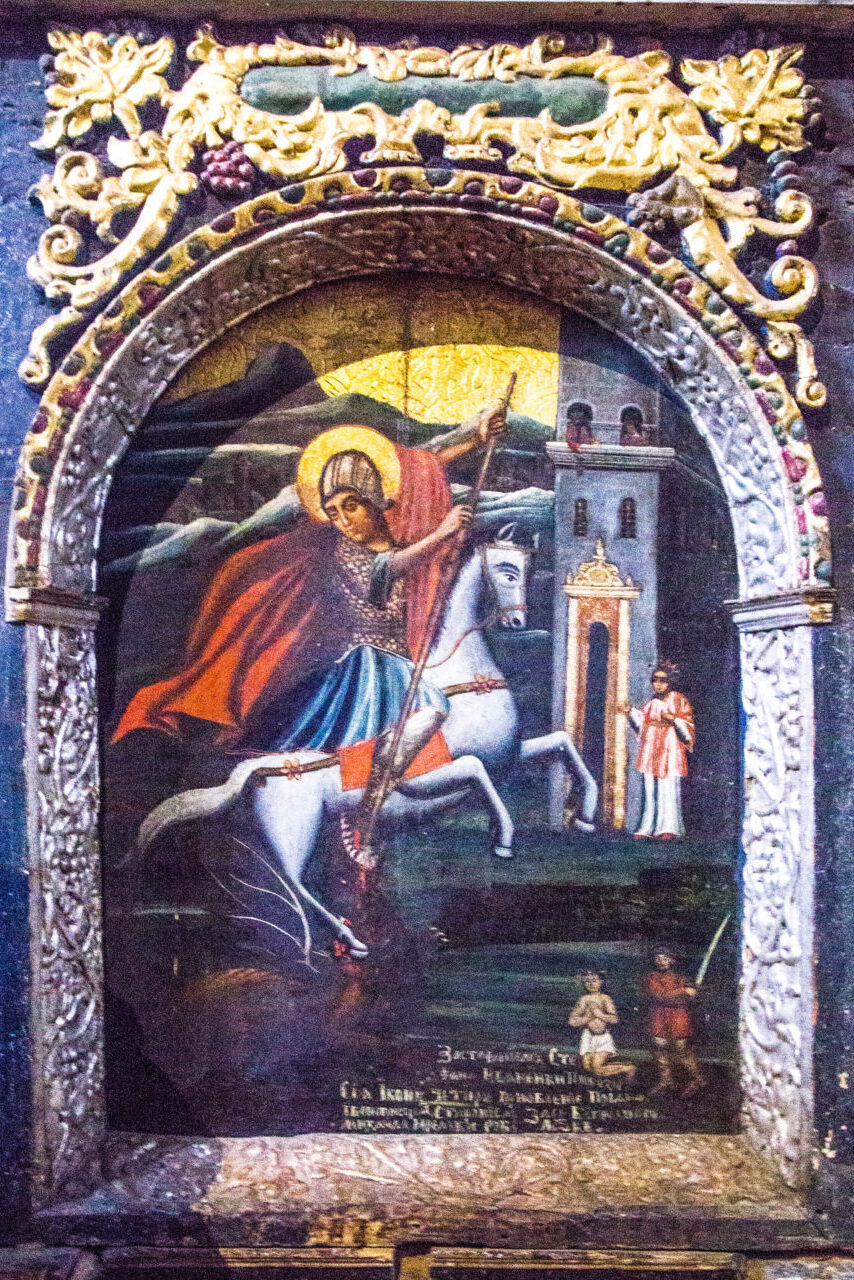 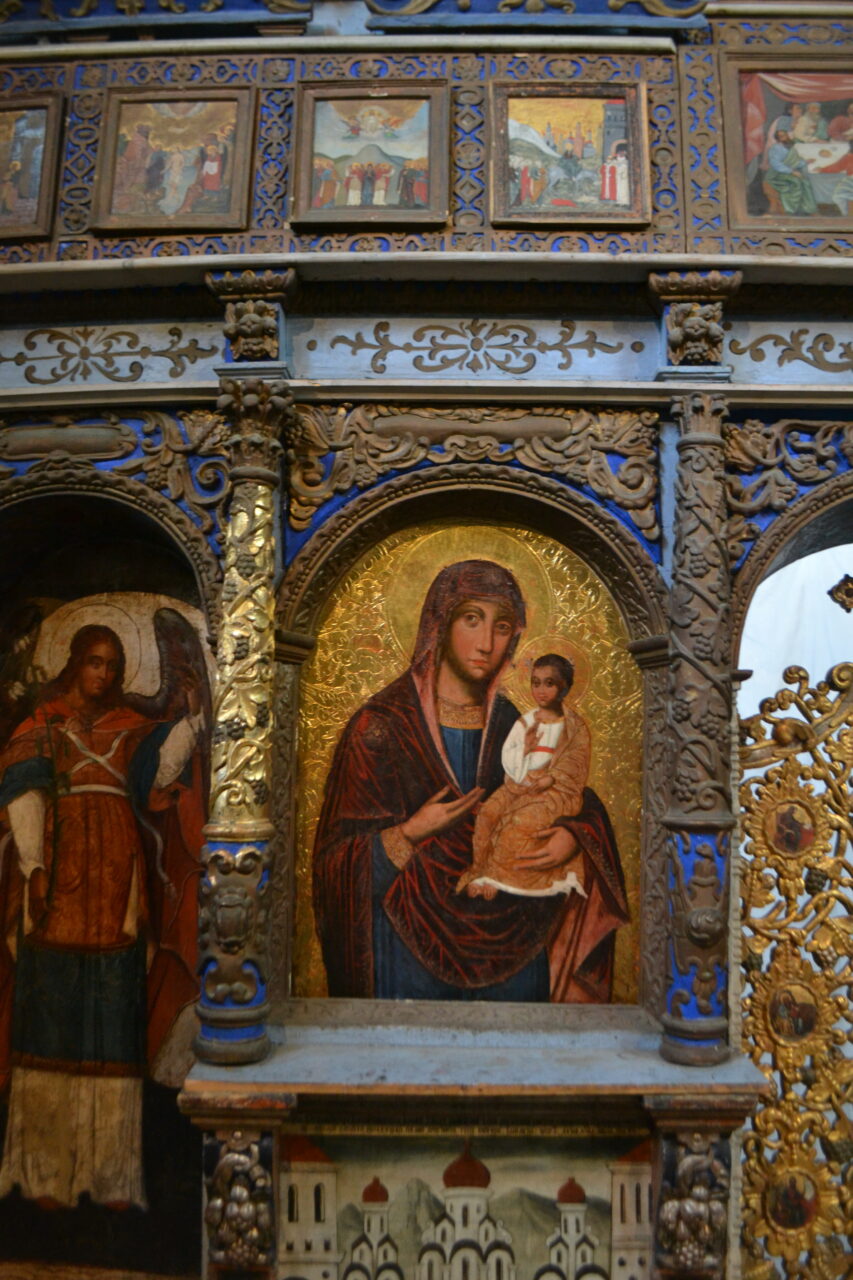 Oh, Drohobych, an exquisite, charming Drohobych, our Galician oil Klondike that in the early 20th century sold more champagne than the haughty Vienna, the seat of most illustrious Emperor Franz Joseph just a stone’s throw away.  Today, we will pass right by your villas and the city hall, your saltern, age-old like the local land itself, and the eccentric symbols on the facade of the St. Bartholomew’s Church. Today we make our way toward your most important fine arts treasure – the wooden St. George’s Church. On Solonyi Stavok Street, 23a. If anyone starts disputing, let him make his case. We have nothing to prove: like a medal on the hero’s chest, St. George boasts an architecture plaque. A rhombus in a circle, the sign of belonging to the UNESCO List of World Heritage Sites. And it has was awarded to the Drohobych church on 21 June 2013. This is the joint nomination, therefore, there are seven more Ukrainian and eight Polish churches besides St. George’s Church on the list, but still it is honorable, prestigious and and just plainly flattering. And not without a reason!

St. George of Drohobych is a masterpiece, you don’t have to be an art historian to understand it. Just look at it with your eyes. And your heart.

You might as well use your mind and imagination: more than half a millennium ago, these walls were oaks in the Carpathian forests. They were rustling tree crowns somewhere in the Carpathian highlands. And then their time came: they were cut down and used to construct the church. Not in Drohobych, but in the tiny village of Nadiiv. This happened at the turn of the16th century. The three-nave square temple with two faceted side kliros was built without a single nail, but there is nothing extraordinary about that: all the Carpathian churches were built the same way. It was an expensive pleasure for the Galician villagers to buy nails, wooden pegs were much easier and cheaper to make.

The bell tower now squeezing up against the wooden fence of the churchyard was constructed much later, but still a long-long time ago, in 1670. And it was born in Drohobych: at that time the church from Nadiiv had been residing in Drohobych for 13 years. It was disassembled, transported here and reassembled again on the site donated to the city by Ivan Broshnivskyi, married to a local priest’s daughter Marukhna from the Terletsky family. It was the very place where once an even older wooden St. George’s Church stood. It burned down in either 1648 or 1657 when the city was invaded by the Cossacks led by Hetman Bohdan Khmelnytskyi and their occasional allies, the Tatars. It should be noted that back then it was the order of the day to buy churches and transport them. It is difficult to say whether the reassembled church had the same features as the church from Nadiiv. During its half-a-thousand-year history, the church has been reconstructed several times. The final, flawless shape of the building was given to it by Gregory the Carpenter from Drohobych.

Already in Drohobych, another miracle appeared in 1659, that is, a Baroque-style iconostasis. It looks impressive even now, almost four centuries later. And so does a well-preserved mural painting by a folk painter Stefan Medytskyi. Literally every inch of the church interior is decorated with polychrome. Decorated with unique polychrome, the paintings are highly valuable in terms of their artwork, iconographic scenes and the state of preservation. The way Galician locals of that time imagined Heaven, what they were afraid of in Hell, how they were dressed – all of this is depicted in the mural paintings, in this Bible for the illiterate. From the 17th century onward, the paintings of the central nave (the figures of archangels, scenes from the Revelation and the Old Testament) and the dome space have been preserved.

What tourists like most is to contemplate the south wall of the nave where there are not only the figures of saints and the Akathist Hymn to the Blessed Virgin Mary, but also the greatest sensation of all the murals of the kind: Doomsday with its monsters, suffering people and didactic influence on potential sinners.

There are numbers “1678” on the crosspiece of the central log, which is the date of the mural painting.

The paintings once decorated the exterior walls of the church – if only you could see it for a moment. But the rain and snow mixed together with old paints long ago, washed it away from the wooden walls. What is left for us is only the remains of the precoating and several indistinct paint stains.

After visiting the church, linger for a while in the arcade gallery, which envelops the church under a wide ambulatory. How much humanity is preserved in this architectural detail, how much care: the ambulatories were constructed so that the parishioners, for whom there wasn’t enough room inside the church, wouldn’t have to stay out in the rain or freeze from the cold in the snowy winters.

The church is open to the public every day and constitutes a part of the local museum “Drohobychchyna”.