Church of the Synaxis of the Blessed Virgin Mary

Church of the Synaxis of the Blessed Virgin Mary 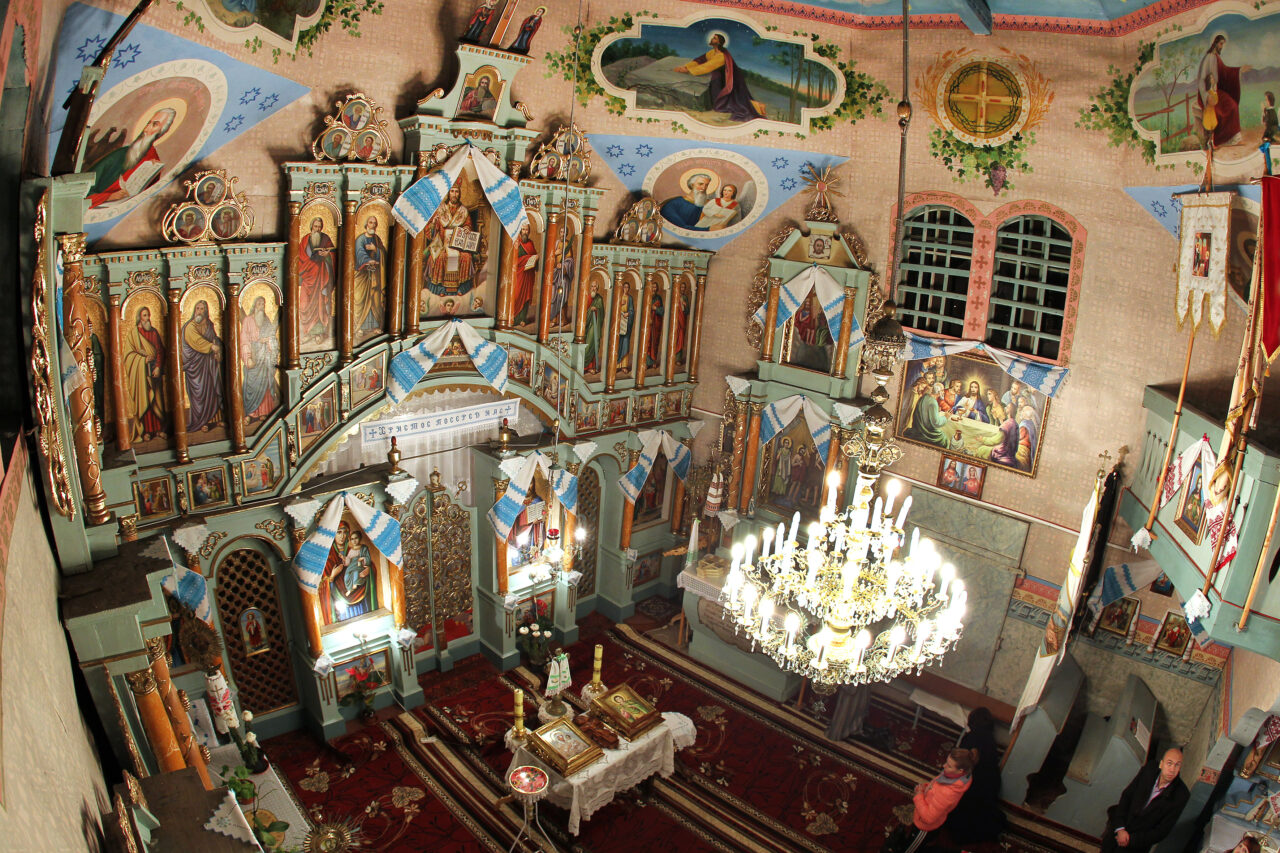 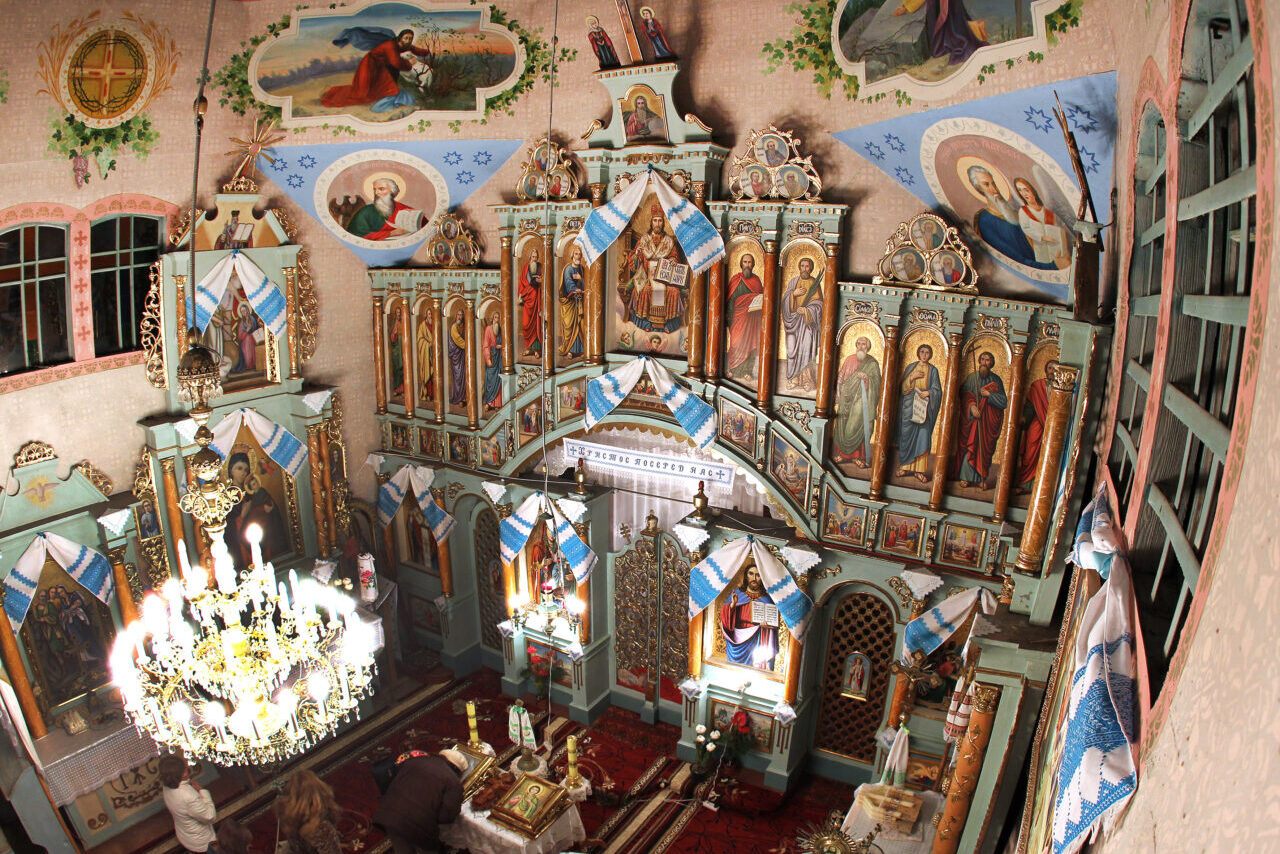 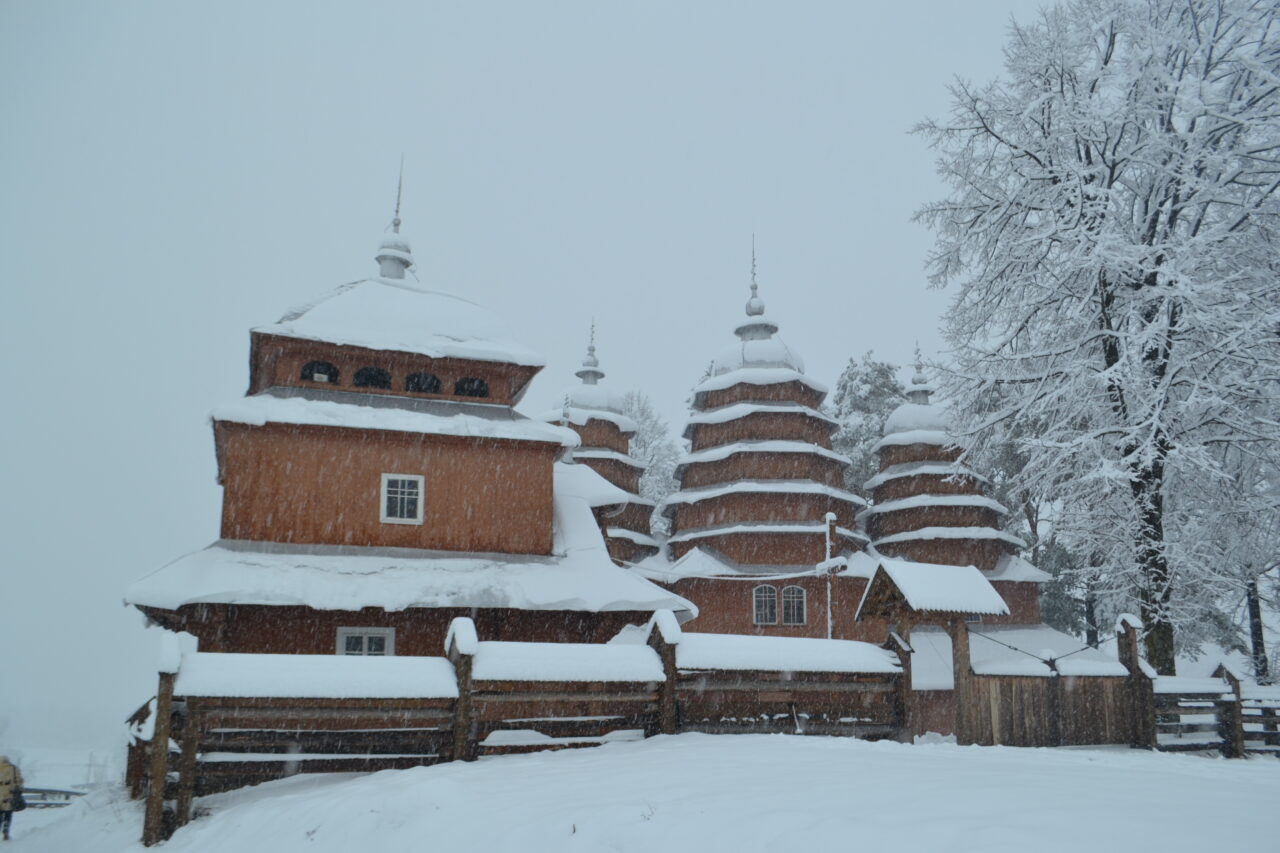 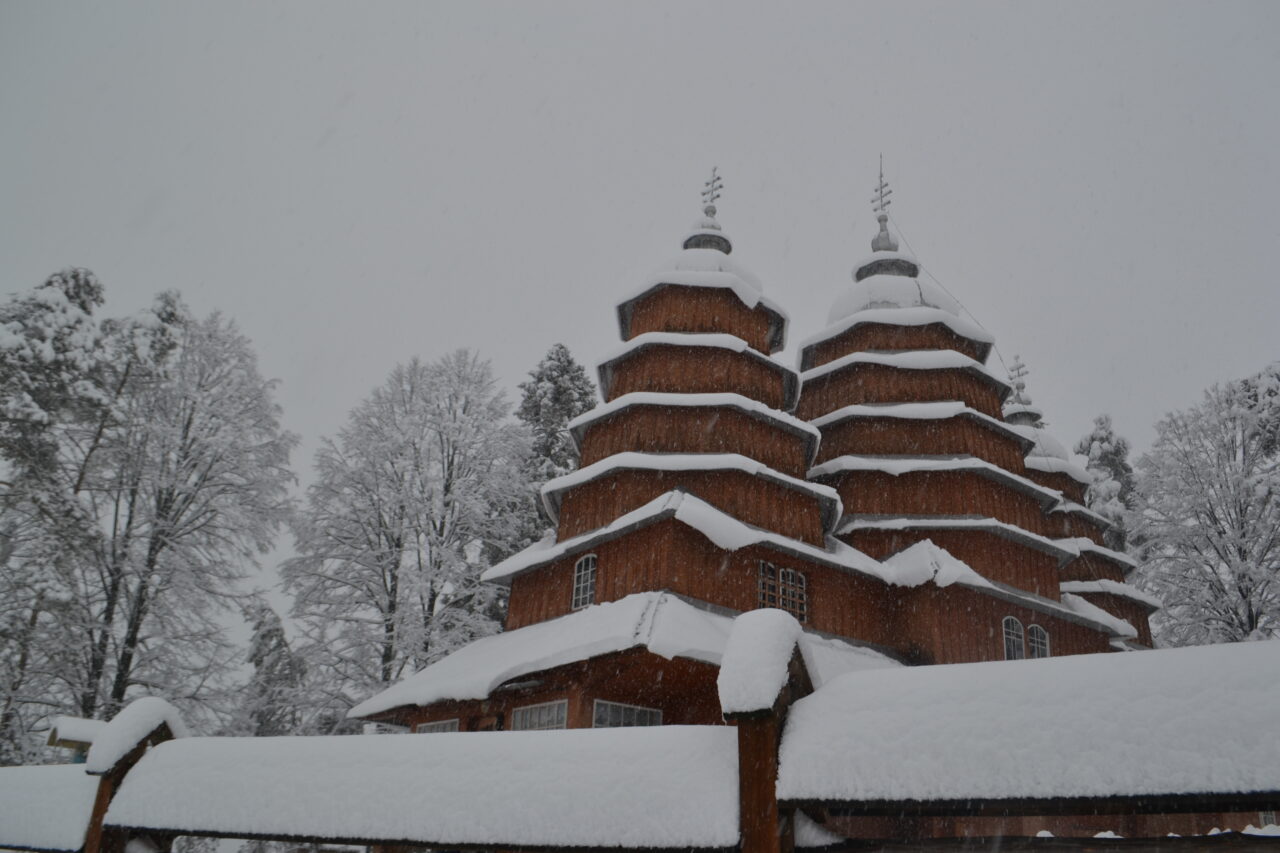 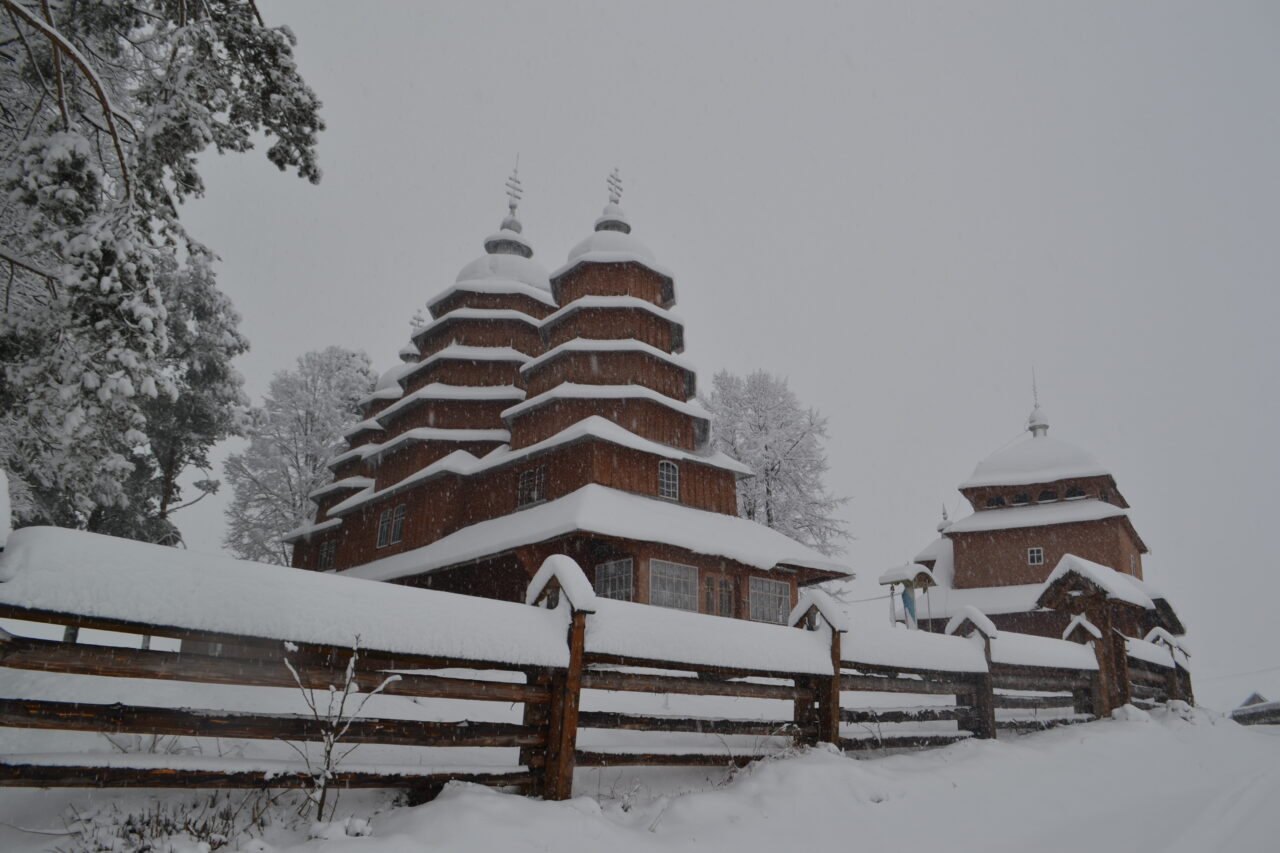 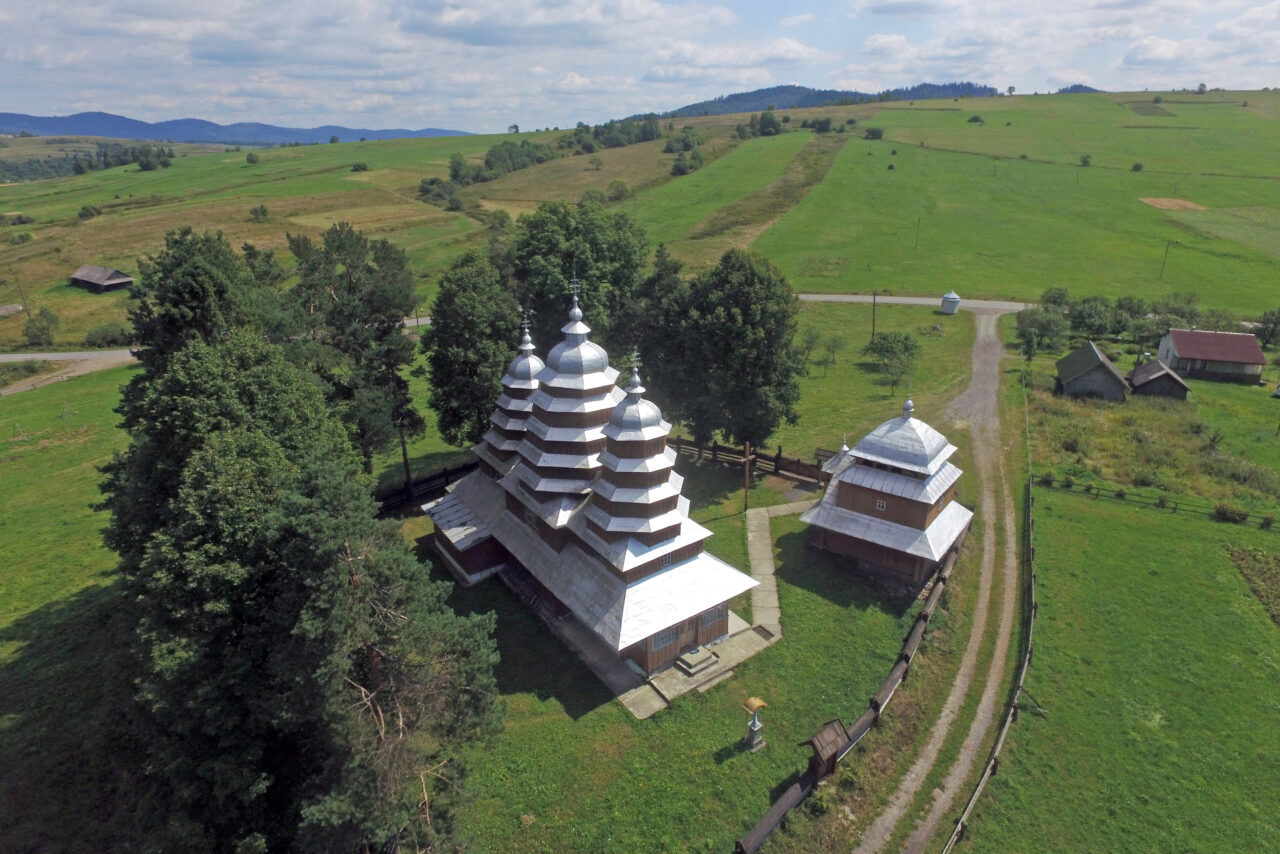 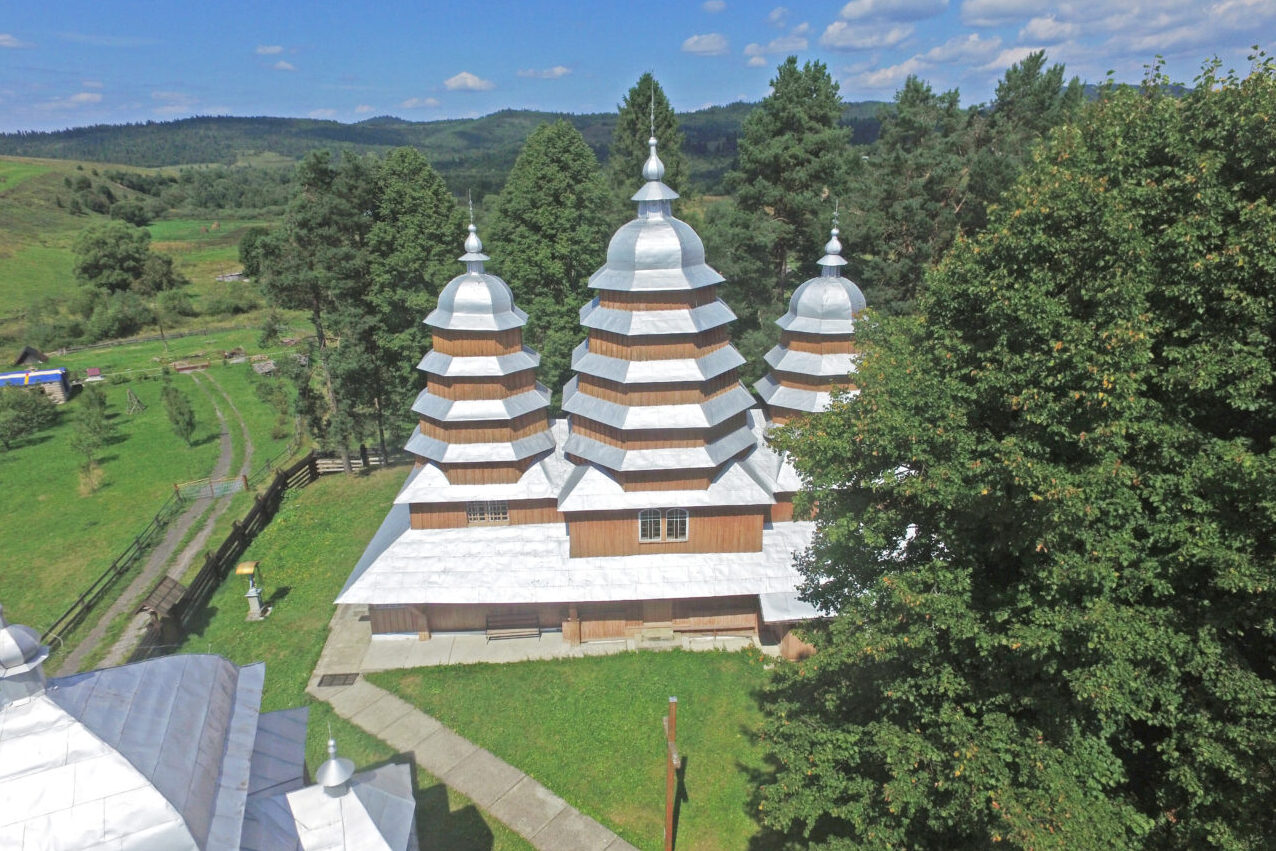 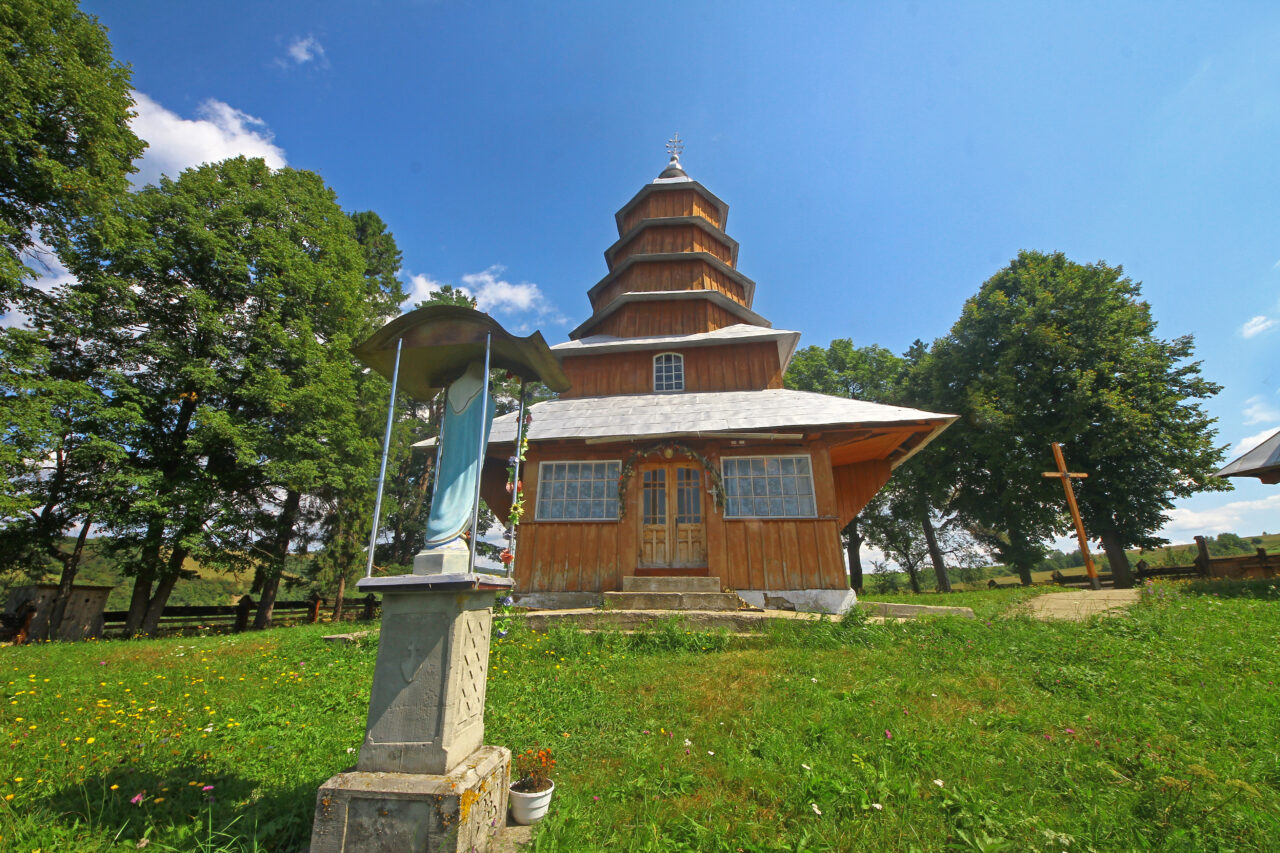 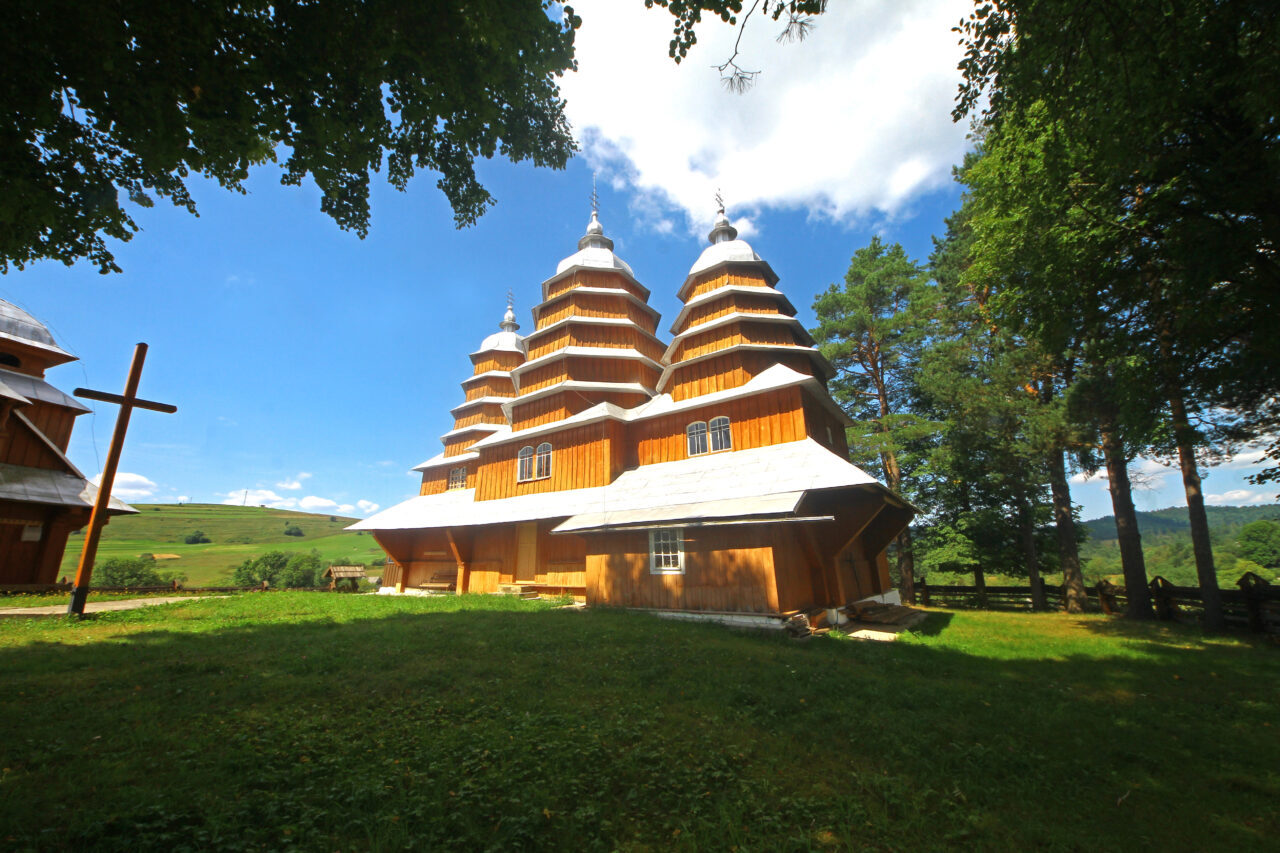 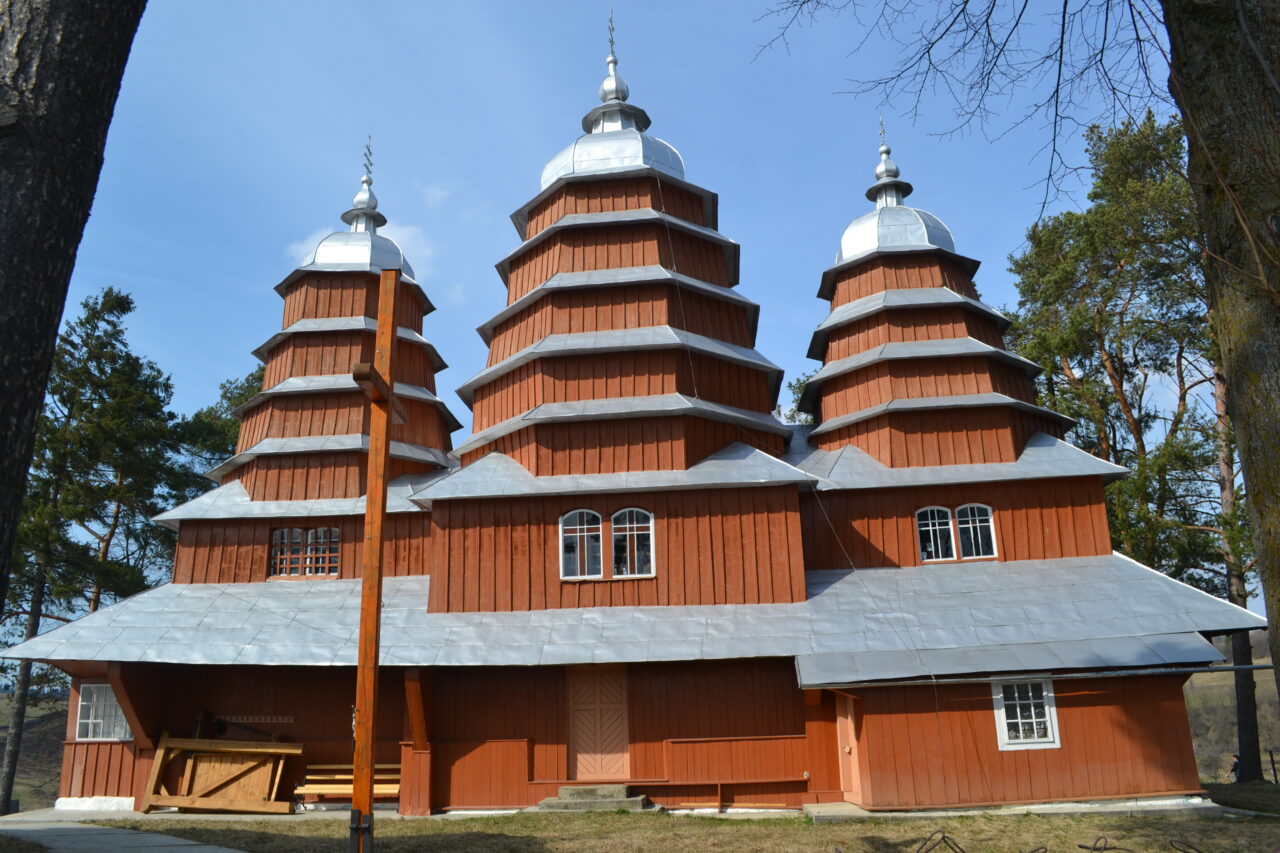 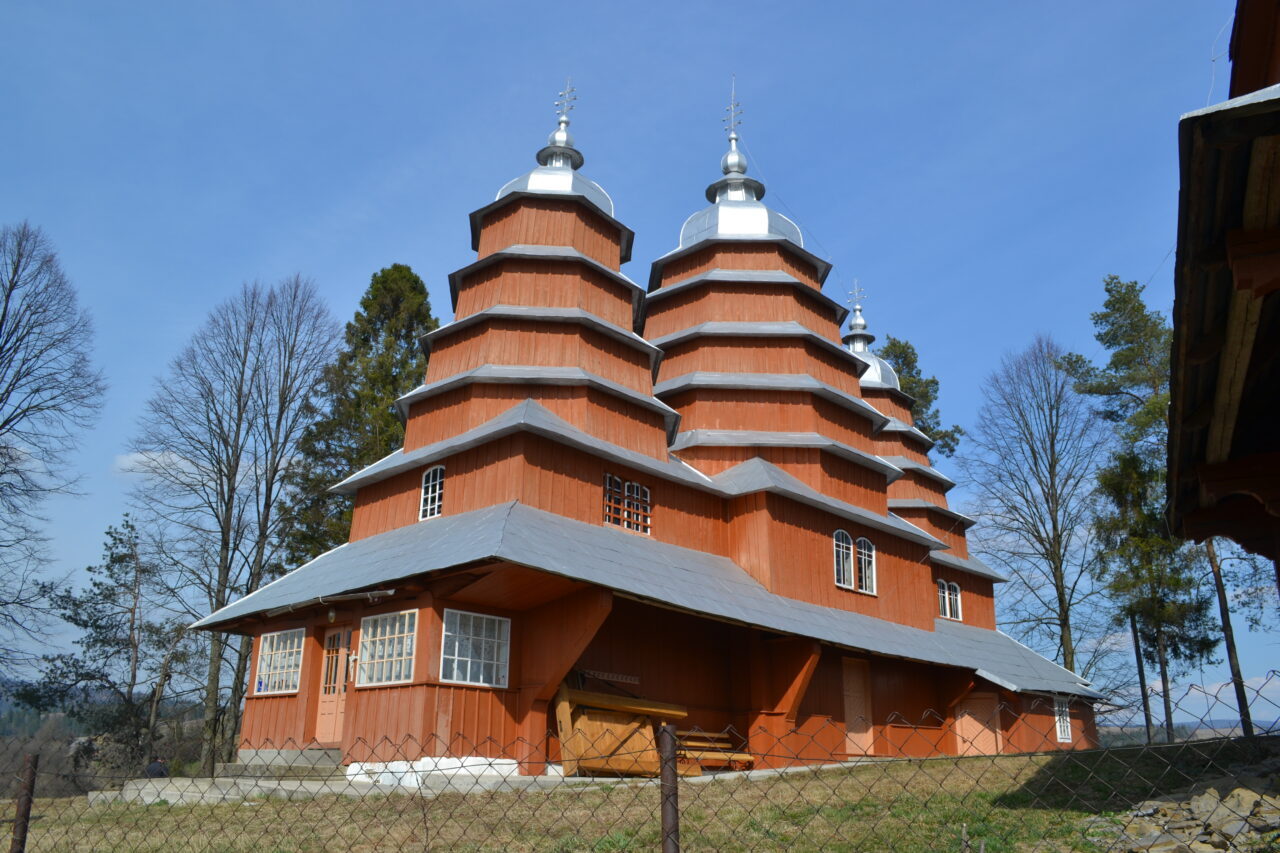 The very road here is joyous enough. The mountains! The Carpathians! The vast expanse! And no infrastructure issues at that: the incredible wooden Church of the Synaxis of the Blessed Virgin Mary (1838) in the noble village of Matkiv of the Turka district in Lviv region is only a little more than two kilometers away from the closest Ukraine has to a freeway, the Kyiv-Chop motorway. The side road, too, is quite manageable — a nice bonus for those travelers who are used to getting past the thorns of the Ukrainian roads to the stars of the Ukrainian architecture. And the three-domed Boikos-style temple in Matkiv is a real star. Since June 2013, it’s been included in the prestigious UNESCO World Heritage List — an Oscar-like award for architectural and natural monuments of our planet. However, the temple was included in the elite list under one condition: it is necessary to remove the tinplate from the walls of the church. Such honor is conferred only on the sites that have remained in their authentic form. And since the nomination is called the “Wooden Tserkvas of the Carpathian Region in Poland and Ukraine,” the nominees have to comply. The church should be — that’s right! — wooden. But so far the process of tinplate removal in Matkiv has stalled. We can even guess why: time slows down  around the masterpiece in the Beskids.

The most mystical thing about this wonderful temple is its timelessness, its detachment from the modern hustle and bustle. Even the proximity to the noisy motorway doesn’t prevent you from imagining yourself in a somewhat fabulous version of the past, where no problems exist, but only beauty and harmony. Perhaps, this intimate and homely feeling about the church is brought about by the fact that it was built mainly by women’s fragile hands? According to a local legend, in the 1830s, a lot of Matkiv’s men were forcefully recruited to  the Austrian imperial army. The women of the village waited anxiously for the return of their sons and husbands — and they created a temple – the embodiment of their prayers and appeals to the higher powers: bring our loved ones back home alive. Do you happend to know anyone from Matkiv? Those were their ancestors.

The legend is debunked by the fact though: history has preserved the names of Matkiv’s architects Ivan Melnykovych and Vasyl Ivankovych.

There are seven dozen Boikos churches in Ukraine — mostly in the Turka and Skole districts. But the most beautiful of them is in Matkiv. Take a look at it, even though you might be squinting at the blinding tinplate, and breathe in the soothing scent of pine trees. Walk around the building, step on the soft carpet of spruce needles and thick grass. Rejoice that Ukraine is able to surprise the world with its architecture — since being proud of one’s home country is very good for mental health, especially in such difficult times. As for the tinplate, it will one day disappear from these walls surrounded by the eaves — we believe it will, for it’d be the right thing to do. The parish priest in Matkiv is righteous, too. Vasyl Dryhynych had already accomplished a small feat when he talked the parishioners out of covering the top of the temple with acrid titanium nitride (when the villagers had already bought the steel plates!). He was also the one who saved the walls of the building from wall panels. Soon, the villagers will realize that the priest and the UNESCO are right. There, even the fence around the temple has already been replaced with an authentic wooden one instead of the old wire mesh.

Villagers have simply never seen their temple covered with wood shingles: the church was covered with matt galvanized steel back in the interwar period, when the area was under the Polish rule. At that very time, the church was placed on a concrete foundation to prevent it from getting wet, and a wind porch was attached to the gynecium.

What could’ve become of the UNESCO church had the villagers been able to choose freely, is clear when you look at the Matkiv Orthodox Church. The prominent architect Luka Snihur of Verkhovyna probably wouldn’t have recognized his creation of 1900. This church sits on a nearby hill, not far away; coated with blinding tinplate, it shines like a spaceship sending an SOS signal into space – too bad the villagers are unable to receive it. It appears their love for the bright and shiny is too strong.

But let’s return to the Boikos masterpiece. The church is like the first violin in the orchestra, while its companion, the square, three-tiered bell tower, receives a lot less attention from tourists. That’s very unfortunate, since it’s also a mini masterpiece with several rooms inside and a balcony-like ambon outside. The bell tower was erected by the Carpathian master builder Mykhailo Veklych in 1924.

If you’re lucky to be there, take a look inside – try sitting on the old benches, admiring the iconostasis with carved royal gates and side altars with ktetor’s touching inscriptions, and the murals (late 19th century).

In the history of the church, there was a dark period several decades long, when the temple remained inoperative after World War II. In 1989, when the Soviet Union was falling apart at the seams, the temple was rededicated under the title of St. Demetrius and reclaimed by the local Greek Catholic community. Why the new name? It’s simple: the Synaxis of the Blessed Virgin Mary is celebrated on January 8. That year, the roads to the church were all snowed in, and the bishop was able to arrive for consecration only in a few months.